With the finalizing of the ECMA Script 2015 (ES2015) specification in June of last year, the JavaScript community can move towards the implementation of ES2015 in the many JavaScript engines in the marketplace.  ES2015 was formerly known as ES6, but following the pattern of other programming languages, the year is now being used instead of an arbitrary version number.

ES2015 offers many helpful new features and cleaner syntax for existing features. One example of this cleaner syntax is the class keyword, as well as improved syntax for using prototype inheritance in JavaScript applications.

What is JavaScript Prototype Inheritance?

In ES5 and earlier, constructor functions defined “classes” like this:

The constructor function is the same function as defined in ES5. The class keyword wrapped block is where properties on the prototype are defined (this will be shown later). The new keyword syntax for instantiating a new instance of the class remains unchanged from ES5.

With this new class keyword syntax comes a function object, which is what ES5 used. Observe the following output from the Node.js REPL environment. First, we define a new class and then the typeof operator lists the type of the class object.

ES2015 did not redefine the role and purpose of the constructor function; it simply cleaned up the syntax.

What are Constructors in JavaScript?

The equivalent constructor function with ES2015 syntax looks like this:

While the syntax is a little more verbose, it is also clearer, and makes it easier to add inherited properties.

To instantiate objects with either syntax, the code is the same.

Prior to ES2015, most developers who coded JavaScript did not understand how to setup an inheritance relationship between objects. A quick conversation with a C++, Java, or C# developer would quickly reveal the ease with which they could setup one class to inherit from another, and then instantiate an object from the subclass. Ask a typical JavaScript developer to demonstrate how to setup inheritance between two objects, and the result is usually a blank stare. The reason for this great difference is that configuring prototype inheritance is not straightforward, and the concept of prototype inheritance is foreign to most JavaScript developers. Here is some example code with comments to explain the process of configuring inheritance.

The above code is hard to follow, and it takes a lot of work just for one object to inherit from another while supporting constructor functions. Most JavaScript developers cannot create this code from memory, and many have never seen or considered anything like this when working with JavaScript.

To solve this problem and bring prototype inheritance into greater usage, ES2015 has introduced the extends keyword to the syntax of its new class structure. The following code demonstrates the same inheritance as the first code sample, but uses ES2015 syntax.

Clearly, the second approach easier to understand. The interesting result is that both code samples produce exactly the same object structure. Therefore, while the new syntax simply improves the inheritance code, it does not change the result.

Another way to explore how this works is to look at the ES5 inheritance code generated by TypeScript. TypeScript is a JavaScript pre-processor language, which enhances JavaScript through strong-type checking and transpiling ES2015 code to ES5 code. Transpiling (aka transcompiling) is the process of compiling the source code of one language into the source code of another language. Popular transpilers include CoffeeScript, SASS, and LessCSS, as well as TypeScript.

The _extends function in JavaScript

To support ES2015 class inheritance, TypeScript transpiles the ES2015 extends keyword functionality to a function named __extends, which executes the code needed to setup the inheritance. Here is the code for the __extends function:

The above code is a little hard to follow, so here is an expanded, documented version of it. Review the added source code comments to understand the purpose of each line of code. The __extends function works with any pair of parent and child objects.

The following two lines of code confuse many developers:

Developers may think the code should be written like this this instead:

When a new object is instantiated with the new operator and either the Parent or Child Constructor Functions, the resulting objects will inherit from the same prototype object (PPO). The instantiated parent and child objects are really siblings with the PPO as their parent. The child does not inherit from the parent.

Therefore, the purpose of this code is to establish the following inheritance structure. 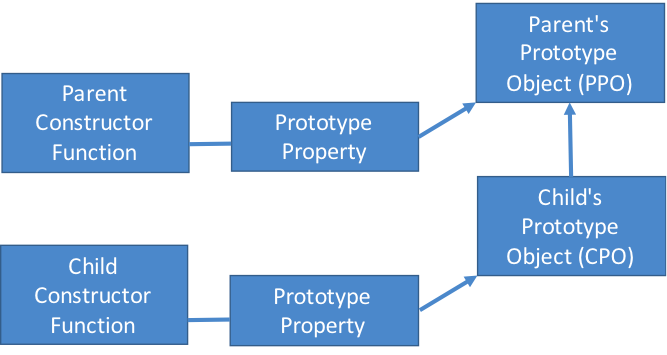 ES2015 syntax for extending classes is much easier to understand. There are two new keywords: extends and super. The extends keyword sets up the prototype inheritance relationship between the parent and child classes. The super keyword invokes the constructor on the parent (aka super) class. Invoking the super function is required even if the parent object does no configuration. The invoking of the super constructor is what actually created the new this object to be used in the child class (aka subclass).

JavaScript objects only allow single inheritance, and there is no built-in support for interfaces (TypeScript offers interfaces).

Eric is a professional software developer specializing in HTML, CSS, and JavaScript technologies. He has been developing software and delivering training classes for nearly 19 years. He holds the MCSD Certification for ASP.Net Web Applications, and is a Microsoft Certified Trainer.