Training a Support Vector Machine (SVM) is only one part of machine learning. Before a model can be used in the real world, the training/testing data must be prepared and the model (predictor function) must be trained. Finding and preparing data is probably the most time-consuming part of machine learning, as there are many data sources to consider and different types of preparatory analysis to perform first.

Two useful tools in the Python world for performing such data munging tasks are NumPy and Pandas. NumPy is great for performing numerical analysis, and Pandas (which utilizes NumPy and database libraries such as SQLAlchemy) is useful for loading and preparing data.

Performing machine learning requires plenty of data that can be loaded from data sources such as relational databases, document storage, CSV files, etc. A very popular Python library for loading, preparing, and analyzing data is the Pandas library. Coupled with other libraries, such as SQLAlchemy and NumPY, Pandas has amazing data access and analysis abilities. Fortunately, the datasets provided by Sci-Kit Learn do not require loading and preparing, however, real-world datasets will. We will explore how to load some custom testing data using Pandas.

Step 1.1 Make a copy of the current "?Predict a Number and Display It" notebook from the previous tutorial using the "File" menu's "Make a Copy" option. Rename the notebook "Load a Number with Pandas and Predict a Number." If you did not complete the previous tutorial, use the example from the https://github.com/t4d-accelebrate-tutorials/ml-tutorial.

In this step, we will load some digit data from a CSV file with Pandas and then predict (classify) the digit with our support vector classifier.

Save the file and close the tab.

Step 1.3 Next open the "Load a Number with Pandas and Predict a Number" notebook. The Pandas package was installed in the first tutorial when setting up the project environment with Conda. Update the code at the top of the notebook cell to import the pandas module:

with the following code:

Pandas provide excellent CSV reading and writing capabilities. There are numerous options such as indicating whether the data being read in has a header. With the digit attributes loaded, the data needs to be reshaped into an 8x8 NumPy array structure so it can be understood by the list comprehension.

Step 1.5 Run the cell now and verify the prediction results. The notebook should look like this: 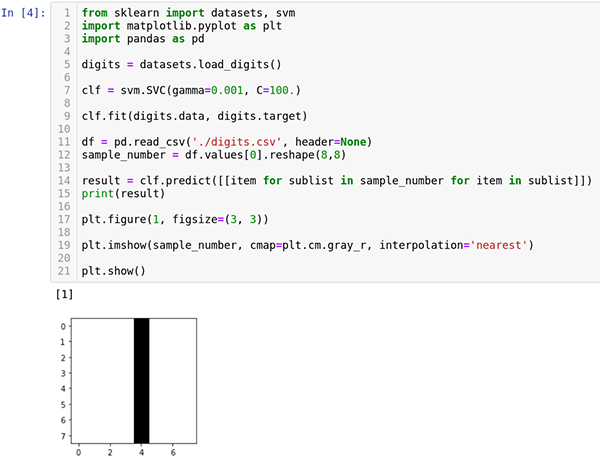 Step 2. Saving and Re-Loading the Model

The result of training a support vector classifier is a trained model that can be used repeatedly. To reuse the model, there needs to be a mechanism for saving the model so it can be reloaded in the future to be used again.

Step 2.2 Update the imports at the top of the notebook cell to import joblib so that models can be saved and loaded again:

Step 2.3 To save the model, add the following code immediately after the call to the predict method:

Step 2.4 Run the notebook cell and there will be a new file named "digits.pkl". It is a binary file, so there is nothing to inspect, but the model has been saved.

Step 2.5 To load the model, add this code immediately before the call to the svm.SVC:

Step 2.6 Comment out the following two lines of code:

Step 2.7 Run the notebook cell. The output should be the same as earlier. The notebook should look like this: 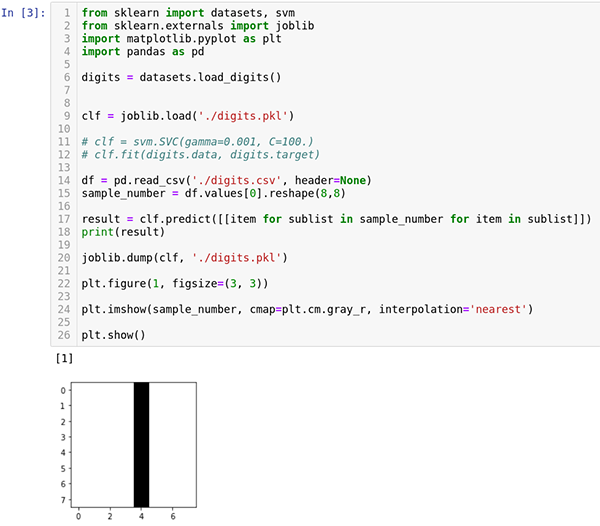 For this tutorial, the RBF (radial basis function) is used for the kernel function. There are several kernel functions from which to choose and even a custom kernel function can be coded. The other built-in kernel options include the linear, polynomial, and sigmoid functions. The RBF function is the default (and preferred) because it is faster than the other kernels and it can map and approximate almost any nonlinear function.

Using the RBF kernel, the SVM draws a bubble (representing influence) around each support vector (the vectors near the boundary). The bubbles (amount of influence) are expanded and contracted until they reach each other to form a decision surface (the boundary between classifications). The expansion and contraction are driven by the gamma hyperparameter value. A high gamma value reduces the influence (size of the bubble), and a low gamma value increases the influence (size of the bubble). The gamma value is inverse to the radius of the bubble (influence) surrounding the support vector.

A lower gamma results in smoother decision surface curves which may result in a less accurate classifier. A higher gamma fits the training data more closely but can result in over-fitting. One great feature of the RBF approach is that it adapts to the data very well, which reduces bias. The linear kernel does not support curves, and the sigmoid and polynomial kernel functions are not as adaptable thereby increasing bias. 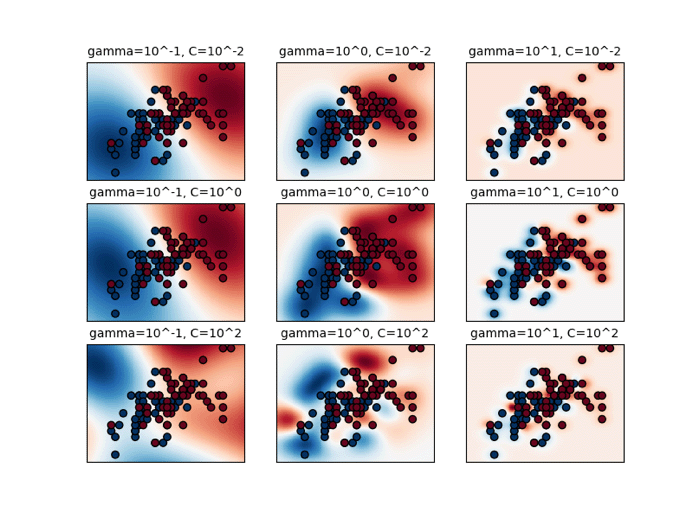 The second hyperparameter needed is C. The C hyperparameter determines the amount of misclassification in return for a smoother decision surface. The value of C increases or decreases the number of support vectors utilized to calculate the decision surface. A low C results in a smoother surface but will have higher misclassification rates. A high C results in a curvier surface that can over-fit the training data.

To summarize, the gamma and C hyperparameters affect the decision surface in similar ways but through different approaches. The gamma sets the size of influence for each support vector and the C value helps determine the number of support vectors selected to create the decision surface. A higher gamma or C makes the classifier more accurate but could result in over-fitting. A low gamma or C makes the classifier less accurate but avoids over-fitting the training data. Generally, a balance is struck between the gamma value and the C value to create a smooth, accurate decision surface without over-fitting. Selecting the right gamma and C values can be done through grid search analysis, which is covered in the forthcoming third tutorial.

Once an SVM has been trained, it can be used as a predictor function to predict new results based upon new inputs.

Step 3.2 Update the imports to include the GridSearchCV and the numpy modules:

Step 3.3 Delete all the code that follows the loading of the digits data. Do NOT delete the digits loading code.

The cv parameter specifies the number of kFolds (explained in detail below) to use for cross-validation. When training a model, the dataset is divided into training data and test data. Models are trained with training data and tested with the test data. With each iteration of testing, hyperparameters are adjusted, training is repeated, and the updated model is tested. While this is a good approach, the inevitable result with enough iterations of adjusting hyperparameters is that "knowledge" of the test dataset creeps into the values set for the hyperparameters. This creeping of "knowledge" results in the model becoming over-fitted to the test data.

Over-fitting either the training data or test data is undesirable. To solve this problem, a third set of data can be extracted from the overall dataset, called the validation set. The validation set is used in the iterative process of tweaking hyperparameters and finally, when all is good, the test set is used. This additional layer prevents over-fitting the test data. The problem with this approach is that the segmenting of the data into three sets greatly reduces the amount of data available for training.

Step 3.7 The fit method is invoked with the training data (inputs and target classification). Add the following code to perform the fit:

Step 3.8 Retrieve the cross-validation and test scores from the grid search. For the test score, the final data point in the digits dataset is used. Add the following code to retrieve score values:

Step 3.9 Add the following code to output the score values:

When the cell completes, the asterisk will change to a number. The number increments on each run of the cell.

The results of the operation are:

The results of the grid search are the best hyperparameters in the search space that can be used to configure the support vector classifier. The cross-validation score and the test score show the accuracy of those hyperparameters when running the search. The higher the numbers, the better.

Machine learning is an exciting, popular and growing field of software development. Combining the power of subject matter expertise, mathematics and programming to predict the future is changing how businesses operate, streamlining the lives of everyday people and changing how software impacts the world.

The following web sites and books were consulted in the creation of this tutorial series: