Toronto Canada, commonly known as "Terronna" by the locals, is quickly becoming a major tech hub. Canada has welcomed more than 40,000 tech workers from around the globe in the past two years alone. In fact, according to a recent report published by CBRE, Toronto saw the biggest growth in tech jobs of any North American city within the past five years.

Python is a fast, flexible, and powerful programming language that is freely available and used in many application domains. While Python is known for its clear syntax, succinct code, fast processing, and cross-platform compatibility, there's more to it than that! Python programming offers major opportunities for those who want to excel in the tech industry. According to StackOverflow, Python was one of the most in-demand technologies of 2018, 2019, and most likely will be in 2020. In addition, Python was ranked as the world's fourth-most popular programming language among professional software developers.

In Toronto and elsewhere in Ontario, we have trained for:

Here is feedback from past students in Ontario:

Accelebrate not only provided a course chock full of valuable information, but also tailored the course to the needs of our team.

Exceeded my expectations! I have taken too many course where instructor simply read from slides and did not really seem to have an interested or any real knowledge of the subject. I have a deep respect and appreciation for [the instructor's] knowledge and genuine interest in sharing it.

The instructor was very well versed in Flash. But, not just Flash. he was able to build the bridges between Flash and other programs.

The instructor was well versed in Actionscript 3.0. He was able to demonstrate the endless possibilites that ActionScript 3.0 provides.

Instructions during the entire class were clear and concise, the instructor was very professional and delivered the training like an expert.

Python is a remarkably powerful dynamic programming language that is used in a wide variety of application domains. Python is often compared to Tcl, Perl, Ruby, Scheme or Java. Python runs on Windows, Linux/Unix, and macOS, and has been ported to the Java and .NET runtimes. To learn more about Python, its applications, and benefits, visit the Python Software Foundation. 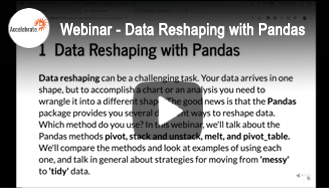 © 2013-2021 Accelebrate, Inc. All Rights Reserved. All trademarks are owned by their respective owners.
This site is protected by reCAPTCHA and the Google Privacy Policy and Terms of Service apply.