This article reviews the state of JavaScript frameworks in 2022. We begin with a look at their relative popularity and adoption and provide some key insights behind the statistics. Next, we examine the more technical aspects of each framework including syntax, API, innovations, and commonly used programming languages and software/programming methodologies. Finally, we explore the future of the frameworks and what trends and pushback we are seeing in their adoption.

There are numerous sources for insight into the popularity and adoption of JavaScript frameworks including Stack Overflow's Annual Developer Survey, download trends on npm (the JavaScript package repository), Thoughtworks Technology Radar, and the State of JavaScript Survey. Let's walk through each.

The Stack Overflow Annual Developer Survey is the most reliable source of information as it has the over 80,000 developers completing it each year from diverse technical backgrounds. The most relevant parts of the survey are the Web Frameworks sections, in particular the Most popular technologies, as well as the Most loved/dreaded, and wanted frameworks.

In 2021, React.js surpassed jQuery as the most used web framework and Angular and Vue.js continue to increase adoption. 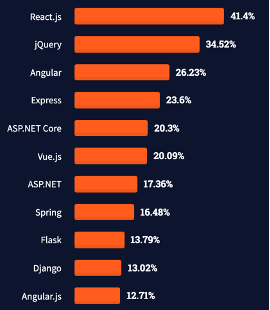 Newcomer Svelte takes the top spot as the most loved framework. The blue is loved. The purple is dreaded.

React is the most wanted, desired by one in four developers. Vue.js is also appealing to many developers. 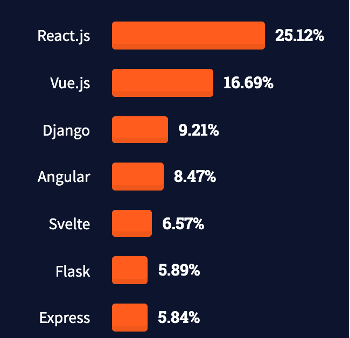 Each data point on this chart represents the number of weekly downloads for each of these frameworks.

What surprises most people is the large lead React has over the other two major JavaScript frameworks. To better understand why this is the case, it is important to realize that not all the frameworks have the same number of use cases (jobs).  React is not only compelling for creating web applications, but also websites and native mobile applications for iOS and Android (with React Native). This effectively gives React three full-time jobs to Angular's one (web applications).  Vue.js has two jobs (web applications and web sites).

One last thing to consider is that in my experience, Angular is used considerably more in large companies.  These companies often have an internally hosted npm repository for security reasons where developers can download only approved libraries instead of getting the open-source code externally from npm.  This can easily mean one download should have counted as 10,000 downloads (some companies employ a lot of developers!), so I believe the numbers get skewed.

The State of JavaScript survey is another excellent industry survey to help us find which libraries developers want to learn next, which have the best satisfaction ratings, and much more.  The latest results were from the year 2020 at the time this article was written. The story these numbers tell is largely the same as the Stack Overflow Annual Developer Survey. To summarize: There are three clear leaders: React, Angular, and Vue.js. The best way to see this is to visit the site and click on usage. The other framework to keep an eye on is Svelte, which I talk about more in the last section of this article. Svelte now has a slight lead over React in terms of satisfaction and interest. 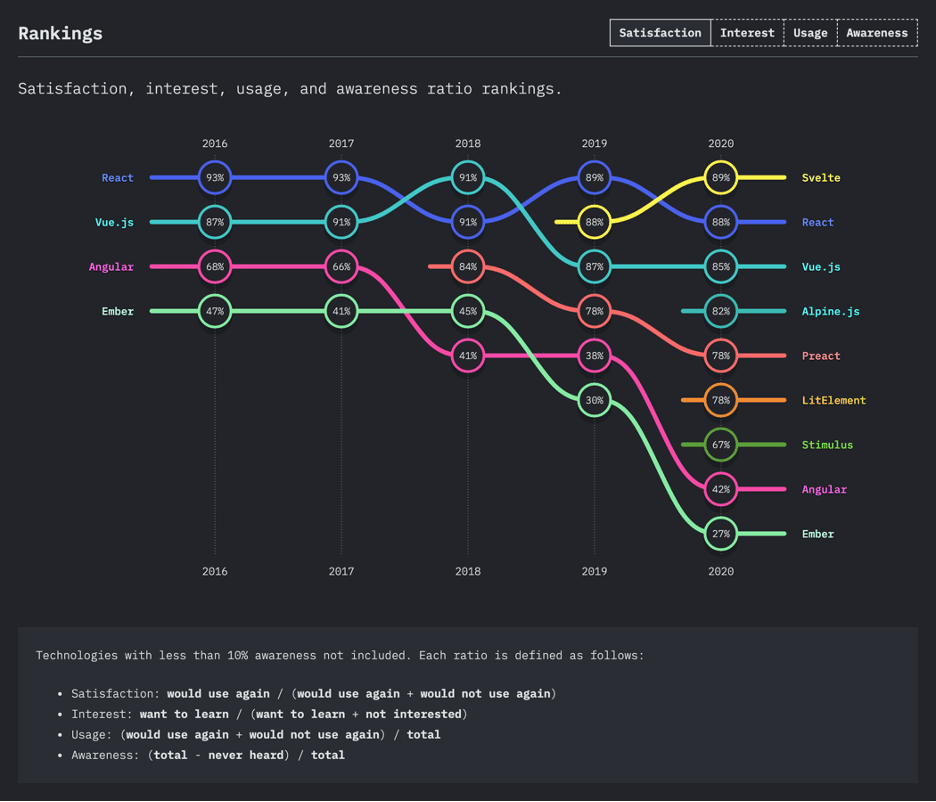 The State of JavaScript survey tends to receive more participation from self-identified front-end developers than Stack Overflow's, although the most respondents still identify as full stack developers.

The Technology Radar from Thoughtworks is more opinionated, granular, and cutting edge in its evaluation of technologies and is great to look at as well.  They are giving an Adopt recommendation for React Hooks (they feel strongly that the industry should be adopting these items) and a Trial recommendation for React Query. These are both interesting technologies that Accelebrate's customizable React training can include.  In summary, even if your team has been using React for a while, consider an updated training on using React Hooks and React Query to modernize your React skills.

After watching a few of the videos, you quickly see how these frameworks differ from one another. Let me highlight some of these technical differences, particularly in the syntax and APIs:

Angular, React, and Vue are the current popular choices for a JavaScript framework. What about in the future?  Looking into my crystal ball (which has admittedly not been 100% accurate in the past), I think the most likely to succeed framework (after it graduates from high school!) is Svelte.

Svelte has innovated in several significant ways including having less code, being a compiler and not a framework (resulting in the framework disappearing when built for production, and lastly being truly reactive.

Tiny Applications (Compiler Not a Framework)

Whereas traditional frameworks like React and Vue do the bulk of their work in the browser, Svelte shifts that work into a compile step that happens when you build your app.  Instead of using techniques like virtual DOM diffing, Svelte writes code that surgically updates the DOM when the state of your app changes.

Instead of complex state management APIs (React Hooks) or libraries (Redux), Svelte builds reactivity into the DOM itself, which is innovative and results in less code, easier to understand code, and faster code.

Accelebrate offers customizable JavaScript training courses in all the technologies mentioned in this article and they are listed below for your convenience. Most notably our React curriculum stays current using the TypeScript language (if requested), uses React Hooks instead of class components, and provide forward-thinking alternatives to Redux including React Query. And we offer Angular, Vue.js, and Svelte courses as well. 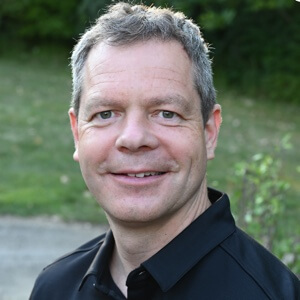 Craig has been a professional software developer for over 20 years. He is also a published auther (The JavaScript Framework Guide) and an independent trainer and consultant specializing in React and Angular.
Request Pricing