(or The Reason the Internet Was Invented, or Cat Pictures for the Win)

In this article, I'll use Groovy to access a publicly available RESTful web service, parse the downloaded data, and build a GUI to hold the resulting images. The code will demonstrate the Groovy JDK, maps, the collect method, I/O processing, and the builder pattern, all to achieve its ultimate goal: looking at cat pictures.

A Flickering Light In The Darkness

There are many so-called RESTful web services available to the general public. Despite the name, however, most only support GET requests. This isn't terribly surprising, since POST, PUT, and DELETE would require some kind of transaction, and security, and all sorts of protection against the sort of damage reminiscent of YouTube comments[1].

Examples of that sort of services include Open Weather Map (http://openweathermap.org/api), Currency Exchange Rates (http://openexchangerates.org), the Bing[2] Maps REST services (http://msdn.microsoft.com/en-us/library/ff701713.aspx), the Google Maps Geocoder (https://developers.google.com/maps/documentation/geocoding/) and the source for this article, Flickr (https://secure.flickr.com/services/developer). Each supports HTTP GET requests only.

Believe it or not, Flickr used to be the definitive site for image sharing, and some people still use it. Access requires a key, which means you need to register with Yahoo!, another web site that used to matter long, long ago when the web was shiny and new.

Why use it here? It's available, it's free, and, most important of all, it's got cat pictures.

Groovy is one of the new family of languages that compiles to bytecodes for the Java Virtual Machine. It's simpler than Java, yet much more powerful, and has an easy learning curve for existing Java developers. It's cool in its own right, and also forms the basis of interesting projects like Grails and Gradle.

Hey, I even wrote a Java/Groovy integration book about it.

Now on to the Groovy. Let's assume you register and receive your special key. Save it in a file called flickr_key.txt, so you can access it this way:

Accessing a property (like text here) in Groovy is the same as invoking the corresponding getter or setter method. Here, the Groovy JDK adds the getText method to File, which returns the contents of the file.

The base URL for the web service is:

I included the “?” because I want to append the generated query string to the end point to get the complete URL.

The Flickr API uses a query string with a lot of parameters. Here I add them to a Groovy map.

I'm calling the flickr.photos.search method with the api_key. I want JSON data back, but not as a JSON callback, and I want photo data using the cat tag. It's not terribly complicated, but there are a lot of parameters.

The cool part is that a Groovy map like this can be converted to a query string using a very common idiom. Thecollect method applied to a map generates a list by applying a closure to each element of the original list. Therefore I can generate the query string thusly:

The two-argument closure takes each key/value pair and returns a string where the key equals the value. Then thejoin method applied to the list creates a string whose entries are separated by ampersands.

That means the whole URL is defined by "$endPoint$qs". I can then use the toURL method from the Groovy JDK to convert the string to a URL[3], and the text parameter invokes getText, returning the total response.

I can now use the cool JsonOutput.prettyPrint(txt) method to format the output and write it to a file.

Here's a sample from that output.

From JSON to Cat Pictures

Each photo block has the components necessary to assemble the URL to retrieve it, which is way more complicated than it needs to be but is still doable. Here's the code for that part.

The JsonSlurper has a parseText method that converts the received JSON string into a Groovy map. Then walking the map by calling json.photos.photo gets all the photo objects, and the collect block converts each of them into a URL.

All that remains is to access all the photo URLs and populate a simple GUI with them. One simple way to do that is to use Groovy's SwingBuilder class.

The SwingBuilder has an edt method, which builds the UI on the event dispatch thread. The frame “method” instantiates a JFrame with the given title, makes it visible, and packs it as small as possible. The GUI uses aGridLayout to make two columns of equally-spaced elements, each of which is a JLabel that contains an ImageIconwith the individual photo URLs.

The result is a display of the most recent six pictures tagged cat in Flickr, which can result in almost anything[4]. 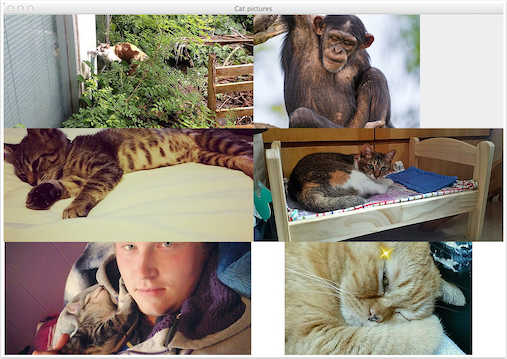 So what have we learned?

The entire script from this article is part of a GitHub repository called IntroGroovy. You'll need to add your own Flickr key, but after that, go for it. Just don't be surprised, apparently, if you get monkeys or tractors mixed in with your cat pictures.

I suppose now I should go and re-implement the whole thing in <a href=”http://lolcode.org”>LOLCODE</a>.

1. Okay, that's a little harsh. Nothing could be as awful as YouTube comments. Or perhaps the correct response to that is, “I didn't know YouTube supported comments.” If that's your answer, I SO wish I was you.

3. What did you expect toURL to convert the string into, a tomato? That would be pretty cool, actually. Now I wish I had that method. Of course, Groovy is an open source project…?

4. Usually it's cats, but once I got a bunch of tractors, which confused me until I realized they were manufactured by Caterpillar.