Pandas-monium: Analyzing Data with the Python Pandas Package (Part 2 of 2)

In Part 1, we explored some of the great power offered by the pandas framework. The process of importation, through the exploration and cleaning and basic wrangling of data, is a simple matter. Time series, handling missing data and subsequent visualization of the results can be performed in a single line!

But what about more powerful tools, such as grouping, aggregation, joins, advanced string methods and other functions? Are they just as simple to carry out? And where are you most likely to see a UFO? All this—and more—in Part 2!

We have a nice longitudinal dataset that spans from 1400 to 2018 A.D. How does the rate of UFO reports change over time?

We will have to aggregate over year and count the number of occurrences. We do this aggregation with the .groupby() operation: 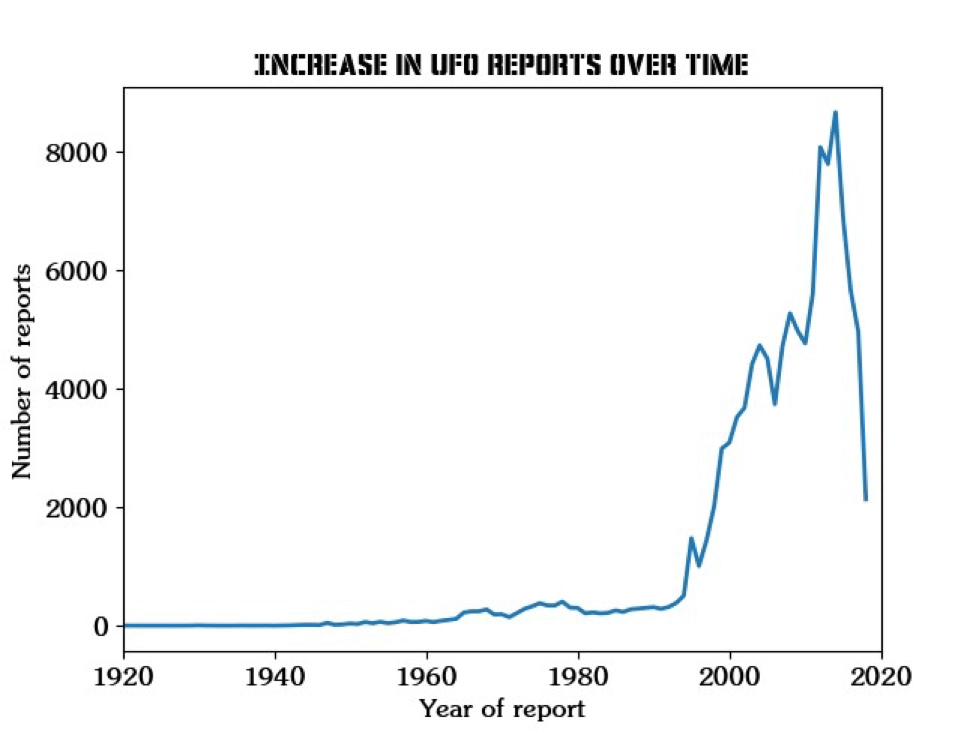 What happened in the mid-2000's? Does the introduction of so-called smart phones (while my own phone seems to keep getting dumber) have anything to do with the rate of sightings?

The first smart phone was introduced around the middle of 2007 (more or less):

Note: again, because the plot is really a matplotlib object, you could also have obtained the legend by calling it 'directly': 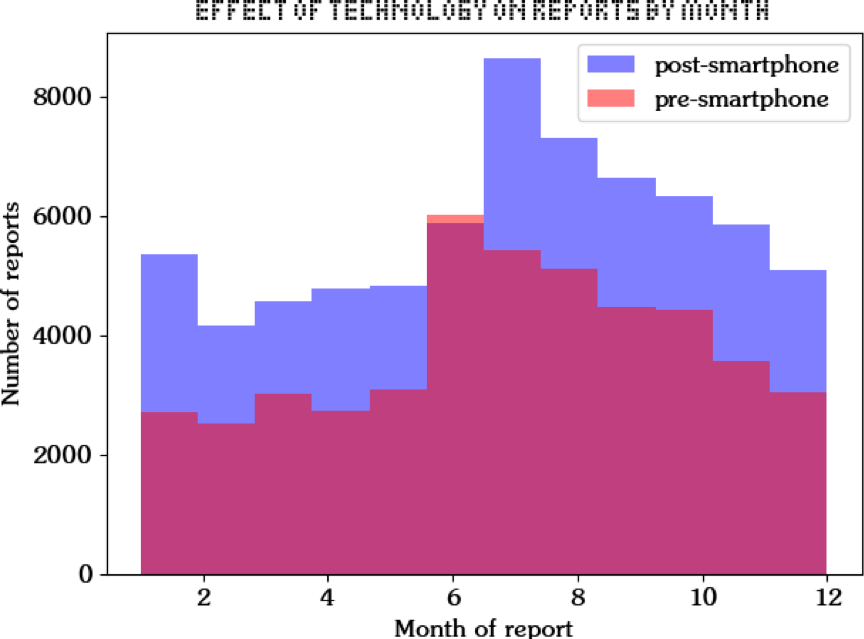 Recall the median of report counts occurred in 2009, so there are more post-2007 reports in total. Interestingly, the reports from 2007 onwards peak in July, rather than in the well-defined June peak for the pre-2007 reports. There also appears to be a relatively heightened rate of reports introduced in January. Any thoughts on why that would be? This is not a rhetorical question!

What is the distribution of reported UFO shapes?

One of the columns displaying a great deal of variability is the 'shapes' field. How are these shapes distributed? 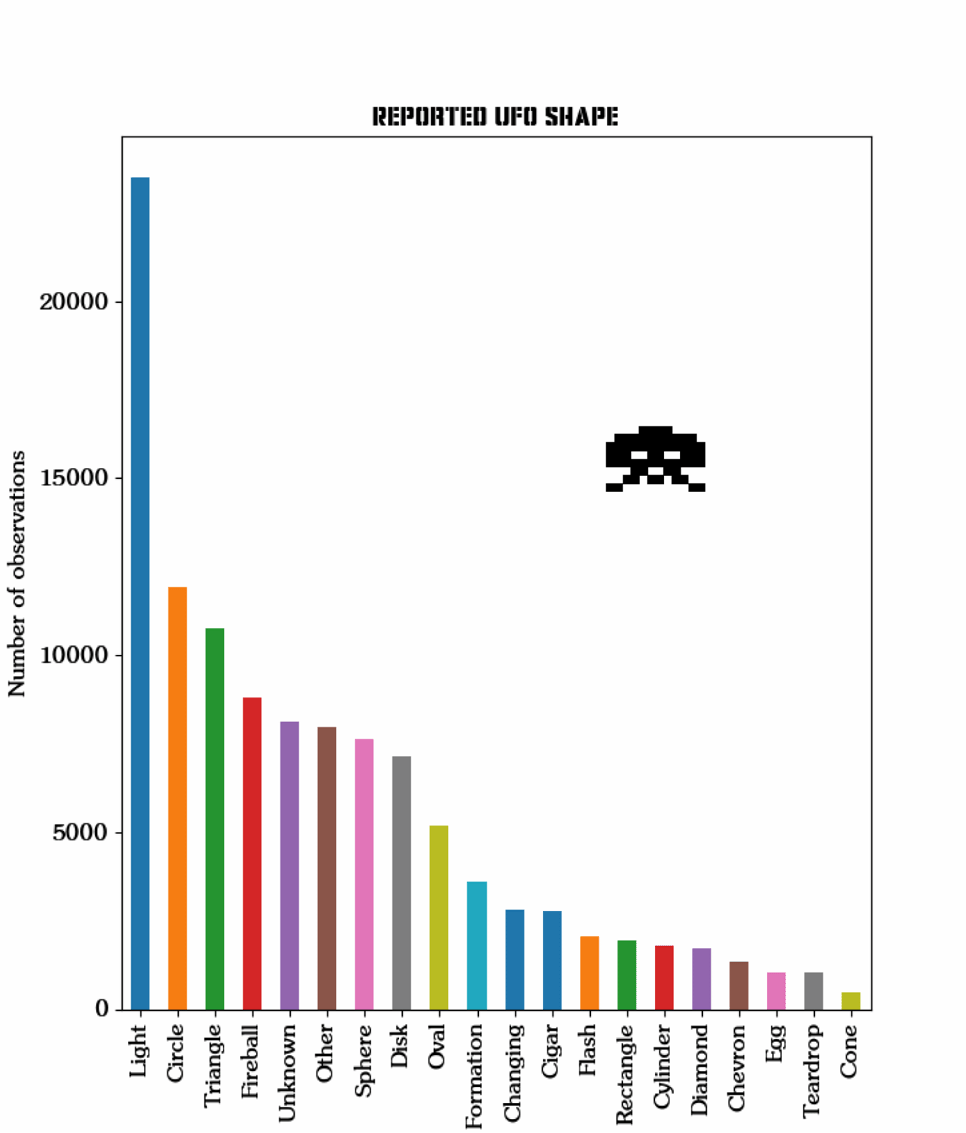 By far the most common shape is 'Light'. Cigar-shaped objects were way down (12th) on the list, which surprised me, as that is the descriptor that always rang out 'technical UFO description' to me as a kid.

What cities saw the most UFOs?

Often in the EDA phase, it becomes clear that further cleaning is required. This is certainly the case here!

Recall we noted that there were 227 cities missing. This hasn't been a problem until now, because we didn't care about the city names. We need to decide how to handle these missing data.

In addition, there are quite a few other tasks required to clean up the city names. For example, there are many entries that attempt to clarify or condition with commentary in parentheses:

Note the use of vectorized string methods and string matching using regular expressions (regex) — the "\)$" means "look for a ')' at the very end of the string". More regex's to come!

This includes the following mysterious gem:

This is the kind of thing we came here for right here!

Note the double use of .dropna() to prevent data misalignment — this is enforced by pandas, so you'll get an error if data threatens to become misaligned.

Speaking of which, we'll get rid of those no-good city NaNs. The .dropna() method has some helpful parameters to specify rows/columns and in-place filtering:

Perhaps we could split the city strings by " (" and retain the 0th element:

While we are at it, there are a few entries that have non-standard capitalization (such as 'AmArillo'). We enforce this with str.title():

There are still 20 cities with parentheses, and at least one with '{' s. I was hoping it wouldn't come to this...

...but we're going to have to wade back, deeper into the murky waters of regular expressions (regex):

Remove anything following a ( or {:

To translate: \s is whitespace, * is a wildcard for 0 or more occurrences of the immediately preceding character. Characters in the [] are treated as logical OR, or ranges. The ( and { each need to be escaped with a \ because they're otherwise meaningful to the regex interpreter. So ("\s*[\(\{]" roughly translates to 'take any potential whitespace, followed directly by a ( or a
{'. In this case, we use this as a delimiter to split the string, and then we discard anything after this (complicated) delimiter.

You have probably worked out by now that regular expressions are (relatively) straight-forward to write, but often painful to read!

Check nothing went awry (as often occurs with prototyping regex):

There are only two entries with (these types of) entry errors left. We can manually input them:

So, how do the cities look now? Let's look at city names containing the string "New York":

Still some way to go.

There are plenty of locations that are between main population centers, often separated by a '/' or a '&'. Most cases, the larger settlement is on the left of the slash or ampersand. Regex to the rescue again!

CHECK. Always check when transforming data for the first time.

Much better. However, there are a lot of cities with helpful-but-unhelpful directional modifiers, such as "East Los Angeles". Similarly, there are some suffixes, such as in "San Francisco Area" that could be purged. There are as many ways to do this as there are to skin a Xenomorph.

I approached this by defining two functions to perform these cleaning operations:

I then obtained a list of cities that have the worst of these problems7, and cleaned them:

How many cities are there now in this data set?

The US cities aren't uniquely specified. We need to add their US state:

All right. Let's look at how many reports came from each city. Taking the top ten:

It certainly makes sense that New York, with the most populous US city, would have the most UFO reports. However, Seattle seems to be pushing well above its weight. That explains the Space Needle!

5: Prepare to be boarded! Joining datasets

How about the observations per capita?

In the words of the great Data Scientist, Sherlock Holmes: "Data! Data! Data! I Can't Make Bricks Without Clay!" We will need some data from another source. The US census bureau has data available for the 770 most populous cities: https://factfinder.census.gov/faces/tableservices/jsf/pages/productview.xhtml

However, there are far too many columns for our needs. We'll rename the non-extraneous census-specific column labels and drop the rest:

Or we could have used the .drop() method as above. Further cleaning:

There are still a few (eight) cities with hyphens or official county designations or other weirdness. Let's impute them manually, otherwise we'd miss out on some major cities!

The convention is largely "X city, Y" where X is the name of the city and Y is the full name of the state. So we could have split by the " city, " delimiter.

Unfortunately, there are towns, cities, villages and counties in the mix. Take one step back — your doctor recommends another dose of regex!

Now we can split the cities and states according to this (horrendous, just don't think about it) delimiter:

A fun aside: how many cities have the same name in the US?

There are five Springfields! Matt Groening must have known this when he created The Simpsons.

There are 36 major cities in the US with duplicated names. We'll need to retain the state information to disambiguate. This is why people have to specify the US state. You don't want to get on the plane to Portland, only to realize you're heading to the complete opposite coast!

Again, make sure we imported fine and the data looks like it makes sense. In the biz', we call this a 'sanity check'.

Unfortunately, the good people at the Census Bureau write out their US states in long form. But we just want their abbreviations. I created a text file with all the states' names and abbreviations, 'state_abbrev.txt':

Let's add the abbreviation references to the city_pop DataFrame using the .merge() method:

Combine the city and state into one column to make merge syntax easier (i.e. we only have to use a single key for each8):

Ugh. But we have too many columns. We only needed two!

Note: by doing this, we are automatically resigning ourselves to analyzing US-only data; the following transformations make no sense if there is no associated US state.

How much data will this discard?

Hence 7.2% of the entries have no defined state. By inspection, most of these are from outside of the US. This could be a follow-up investigation.

Get rid of the resulting city NaNs:

Finally, we can answer the question 'what are the cities with highest recorded UFO sightings per capita?'

The second, Sarasota, FL, isn't even close. Personally, I was expecting somewhere like Santa Fe, New Mexico, or Portland, Oregon, to have the highest reports per capita (the population of Roswell, NM didn't quite have enough population to be included).

What are the states with the most observations?

Once again, Washington is punching well above its weight in terms of UFO reportage. I always thought Jimi Hendrix was out of this world!

There are plenty of avenues for exploration of this dataset using pandas.

For example, there are over 720 potential 'HOAX' flags in the summary pages. Adding this label to the observations may make a neat machine learning exercise (although it's unlikely we have enough information in the reports alone to make any useful prediction).

There are numerous famous UFO incidents that may warrant an in-depth study, such as the 'Phoenix Lights' in 1997, or the 'Chicago O'Hare Lights' in 2006. Unfortunately, the mysterious airship event in Aurora, Texas of 1897 has only a single entry.

Hopefully this tutorial has demonstrated some of the power and ease of application of the pandas module.

There is so much functionality that we could not cover all the features of pandas here. For instance, we have not showcased transitioning between wide (unstacked) and long data formats, or some of the powerful time-series methods, such as periodic analysis or window functions. But we have hopefully shown that data analysis doesn't always have to be difficult. Given the right dataset, it even be fun!

Until next time — see you on the seventh rock from 40 Eridani A, Earthling!

6 More technically, it's interacting with the graphical back-end of your system to display the image.

7 For more details, I refer you to the full code for this tutorial.

8 The on keyword in the .merge() method can easily take a list for primary and secondary keys, but we want to retain the US state information for plotting purposes too.